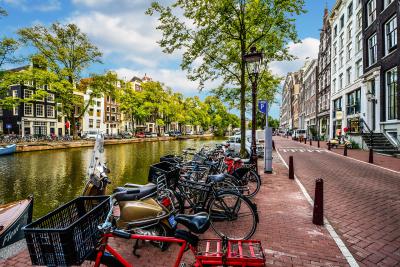 As capital of the Netherlands, Amsterdam is globally recognized as being exemplary in the world of the Smart Cities. Over the past years, Amsterdam has consistently been ranked in the top 10 of the Cities in Motion Index1. with a third position after London and New York in 20192. Amsterdam also won various awards in the smart city field including the European Capital of Innovation (iCapital) award in 20163.

The National Smart City Strategy of the Netherlands, as discussed previously, has tasked the five largest cities of the Netherlands with translating national strategy to their own city. The strategic approach determined that each city holds one Smart City theme as a main area of focus. As a city, Amsterdam’s focus lies on circularity.

With regard to the strategy definition, Amsterdam in particular is driven by both a European and a subsequent national translation of the sustainability goals as set out by the European Commission. These goals are transformed into specific ambitions or goals for the city, in this case set out by the Amsterdam Economic Board4.

The city’s strategy is strongly driven by several goals relating to increasing energy efficiency, reducing CO2 emissions and creating an overall more sustainable way of living in the city4. These goals are agreed upon in Amsterdam’s Sustainability Agenda5 which outlines how the city aims to achieve those goals. Examples are the use of renewable energy sourced from solar panels and wind turbines, as well as its goal to achieve as much emission free traffic as possible by 2025.

Amsterdam embraces a bottom-up strategy, based on smart growth, start-ups, liveability and digital social innovation through its Amsterdam Smart City platform, founded in 2009. It is a private-public partnership. Their partners are governments, knowledge institutions, companies and foundations. It features a community of more than 5500 innovators, connects everyone with energy and ambitions to improve the livability in urban areas5.

Through the online platform (and offline events), Amsterdam Smart City creates an overview of what is happening in the Amsterdam Metropolitan Area, connects communities to share expertise and strengthens new projects that make the region futureproof5.

Another form of collaboration was formed as a result of a collaboration between Delft University of Technology, Wageningen University, and MIT: the Amsterdam Institute for Advanced Metropolitan Solutions (AMS). The institute consists of an intensive collaboration between academic partners (mentioned above), societal partners (including the Amsterdam Smart City platform) along with various industry partners (such as IBM, CISCO, Alliander, KPN and Shell)7. It has various ongoing projects, analysing how the available data for various city functions can be put to use. In March 2017, the Master’s program Metropolitan Analysis, Design and Engineering (MSc MADE) launched. The institute also offers various Massive Open Online Courses (MOOCs).

Amsterdam is also the host of several areas within the city that are used are Urban Living Labs.

With the focus on sustainability, a particular example of a living in Amsterdam is the Green Living Lab. It is located in the nature in the southern area of Amsterdam (Amsterdam-Zuid) and it is a place where scientists, entrepreneurs and creatives meet to explore, stimulate and promote healthy urban living9.

Another interesting area in Amsterdam is the so-called “Marine terrain”. Located in the center of the city, and originally used by the marines, it has been undergoing and will be undergoing constant development as of early 2015. Late 2017, a political agreement was reached which determined that the area is to be used for open innovation and experimentation, sustainable living, recreation and green. Over the past two years, more and more innovative experiments are taking place on the terrain8.

Finally, and specifically with regard to sustainability, the Amsterdam ArenA Living Lab is another noteworthy area. The largest stadium of the Netherlands is also used as a Living Lab as it features numerous innovative showcases and provides space for startups to experiment. Examples of sustainability innovations are stadium seats made out of sugarcane, various mobility and transport oriented pilots in order to improve traffic flow, and customer experience, and the use of batteries of electric cars to store energy generated by 7200 square meters of solar panels which in turn is used to power the ArenA10.

The city of Amsterdam focusses on innovative technologies for energy consumption monitoring and renewable energy production. As a world leader in encouraging alternatives to car travel and in its electric vehicle infrastructure, possibilities for innovative solutions are present in smart mobility.

As of late 2015, the city is using GPS data from an Amsterdam-based navigation software and technology provider to help manage traffic flow in real-time. In fact, as of very recently (mid 2019), the municipality of Amsterdam has started a collaboration with two globally well-known and widely-used navigation providers in order to reduce air pollution in specific areas of Amsterdam by re-routing traffic that does not specifically needs to go to that area.

A final example is Amsterdam’s Climate Street project which encompassed the implementation of several smart and energy-saving technologies in the street, such as smart meters, energy displays and smart lighting.

Amsterdam’s approach to Smart Cities is clear and focused. It follows a bottom-up approach, connecting stakeholders through their Amsterdam Smart City Platform, with the purpose of developing and implementing shared ideas and solution for the city. It is driven by environmental sustainability goals such as increasing energy efficiency, reducing CO2 emissions and creating an overall sustainable way of living. It is driven by the local translation of both the European and national sustainability goals and uses the National Smart City Strategy to do so. Amsterdam stimulates the collaboration of public and private companies, NGO’s, knowledge institutions and citizens.

Let us know what you think about Amsterdam’s Smart City strategy here: